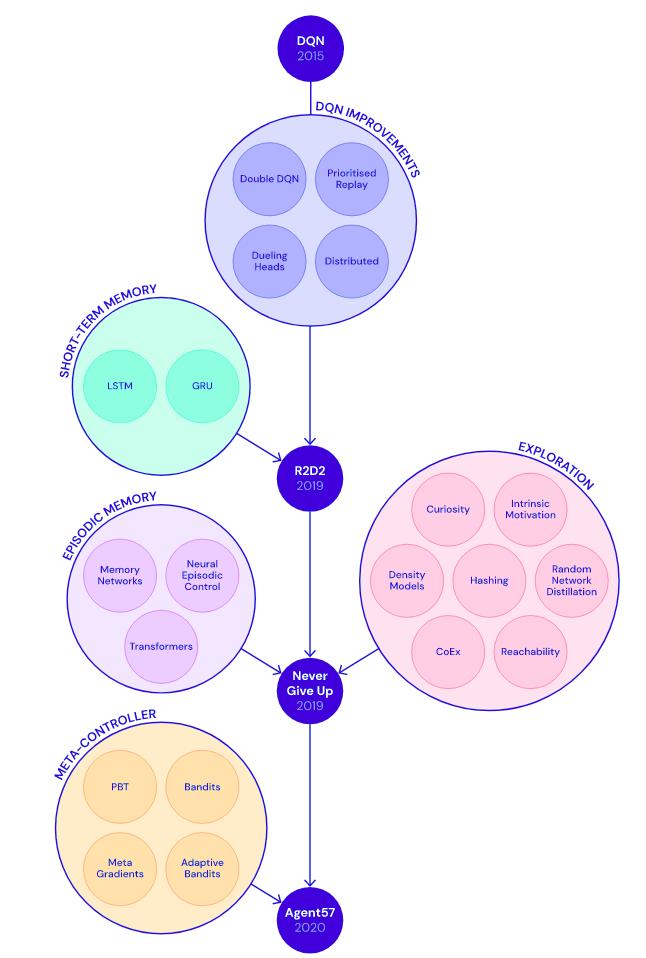 A condensed history of improvements that led to Agent57

Never Give Up (NGU)2 was a monumental success as it was the first agent to achieve good performance on hard-exploration games. However, it conversely failed to gain good scores on “easier” games. The authors hypothesize that this is because, at each episode, NGU uniformly assign a family of more explorative or exploitative agents at random to gather episodes. This process, according to the authors, is suboptimal as the need for exploration or exploitation varies when learning a game as well as with different games.

The authors propose to split the state-action value function (Q) into this:

where \(j\) is a one-hot vector pointing to the \((\beta, \gamma)\) pair controlling exploration and discount for the actor, just like in NGU. The authors show in the appendix that this decomposition is valid and that the optimization of this Q-function is equivalent to the optimization of a single Q-function with reward \(r^e + \beta_j r^i\).

Adaptive Exploration over a Family of Policies

NGU uses a family of explorative and exploitative policies during training and trains them all equally, regardless of their actual contributions to the learning process. The authors propose using a meta-controller to select which policies will be used at training and testing time. To do so, the authors propose posing the policy selection as a non-stationary multi-arm bandit problem. At the beginning of each episode, the meta controller selects a bandit “arm” to assign a pair \((\beta, \gamma)\) per actor. One can imagine that policies with a higher \(\beta\) and a lower \(\gamma\) might be better suited at the beginning of training while the opposte will be true in the later on.At test time, the controller will select which policy is better suited, with arms having a wide range of \(\gamma\) and \(\beta \approx 0\). This allows for far less fine-tuning per-task as the meta-controller decides for itself which policy should be used.

Because the needs for exploration and exploitation change over time, the bandit problem is considered non-stationary. This means that an algorithm like Upper-Confidence Bound (UCB)3 would not work. To alleviate the problem, the authors employ a “sliding-window” UCB, which is described in the appendix.

While MuZero still obtains better mean and median performance, Agent57 is able to get above human-level performance on all 57 games and is the first to do so.