Segmentations can also provide extra supervision (in addition to image intensities) for image registration and are used to evaluate registration results.

Other methods have been proposed in literature to jointly perform the image registration and segmentation tasks. However, these approaches operate on single datasets. 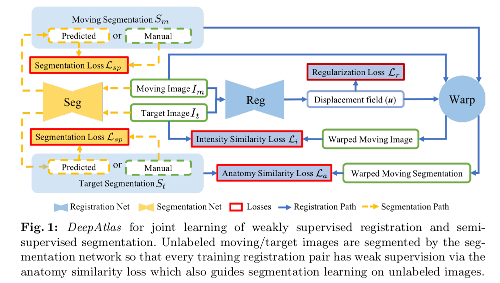 They use the Balakrishnan et al. design for the registration network and a customized U-Net for segmentation.

Their approach is based on 2 parts:

where \(\Phi\) is the spatial transformation applied to the moving image; \(I\) are the raw image data; and \(S\) are the label maps.

They estimate missing moving or target segmentations via the segmentation network so that every training registration pair has weak supervision via the anatomy similarity loss.

where \(\mathcal{F}_{\mathcal{S}}\) is the segmentation network.

The total loss is the weighted sum of the

They alternately train one of the two networks while keeping the other fixed. Since it is difficult to jointly train from scratch with unlabeled images, both networks are pretrained independently.

They use two networks independently trained in a supervised fashion as baselines. 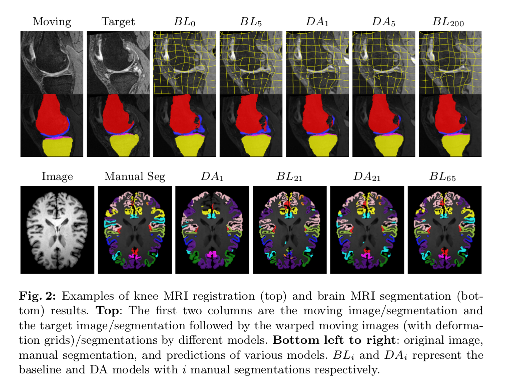 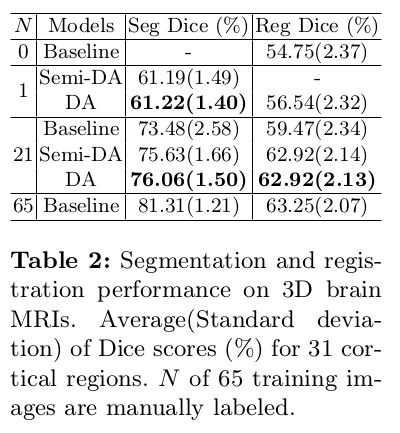 When only given one manual segmentation, their method provides one-shot segmentation learning and greatly improves registration: one network can benefit from imperfect supervision on unlabeled data provided by the other network.