The building blocks of the proposed method are as follows:

The loss is based upon the notion of a softmin function which is “the opposite of softmax as it assigns a large value (≈ 1) to the smallest value of the input vector” :

By taking the \(-\log(.)\) of that function (just like a cross entropy) one gets the following loss:

whose effect is to maximize the margin between the correct and the incorrect classes. To explicitly lower the distance to the correct class center, they use a second loss function :

The overall loss function is:

Several results are presented, maybe the most interesting ones are the ones in Figure 2 where we see a better separation between the known and the unknown classes and Table 1 for the AUROC scores on 6 different datasets obtained against 7 competing methods. 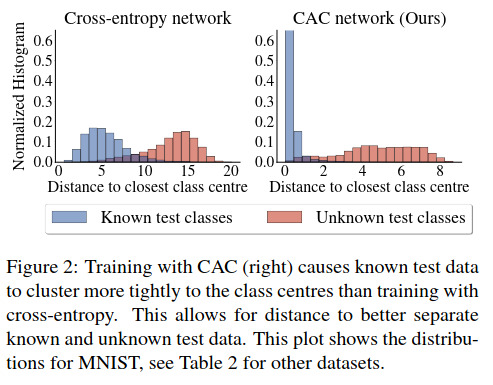