The authors propose that while theoretically sound, the VAE framework poses a few problems, e.g. stochasticity, MC estimates of reconstruction expectation, etc., that rely on tricks and assumptions to work in practice. They emphasize that the common implementations of VAEs boil down to augmenting the decoder’s input with Gaussian noise, and they propose to theoretically consider VAEs in that perspective.

They also refer to an exhaustive literature in recent years that suggests implicit regularization in neural networks, through methods like batch normalization, dropout, etc., already smooths the functions learned by convnets, and that autoencoders might not need to enforce an explicit prior on the latent space for it to be smooth.

Under the perspective that VAEs are deterministic autoencoders with added noise, the authors explain that this noise is in fact a key mechanism in regularizing the decoder. Thus, they propose to “substitute noise injection with an explicit regularization scheme for the decoder”.

The loss that a RAE minimizes can thus be formulated as:

\(\mathcal{L}_{REG}\) is a regularization to enforce on the decoder, and the authors propose multiple variants:

They also consider a model without an explicit regularization on the decoder (referred to as RAE in the results), since they were curious to investigate if training techniques like dropout, batch normalization, etc., would implicitly regularize the network enough.

Removing the KL divergence term from RAEs, the authors acknowledge that they have detached the encoder from the prior \(p(z)\) that could help guide sampling from the learned distribution. However, they argue that the mismatch between the prior and aggregate posterior is a problem recognized even in VAEs.

Thus, they propose to fit a density estimator \(q_{\delta}(z)\) on the encodings of the dataset \(\{ z = E_{\phi}(x) \mid x \in \mathcal{X} \}\). This way, their ex-post density estimation requires no additional training, and can be used with any autoencoder.

In their experiments, the authors use either a Gaussian or a mixture of 10 Gaussians as \(q_{\delta}(z)\).

The authors report image modeling results on MNIST, CIFAR10 and CelebA. The paper also reports results for structured inputs, using what they call a GrammarRAE, on mathematical expressions and molecules. 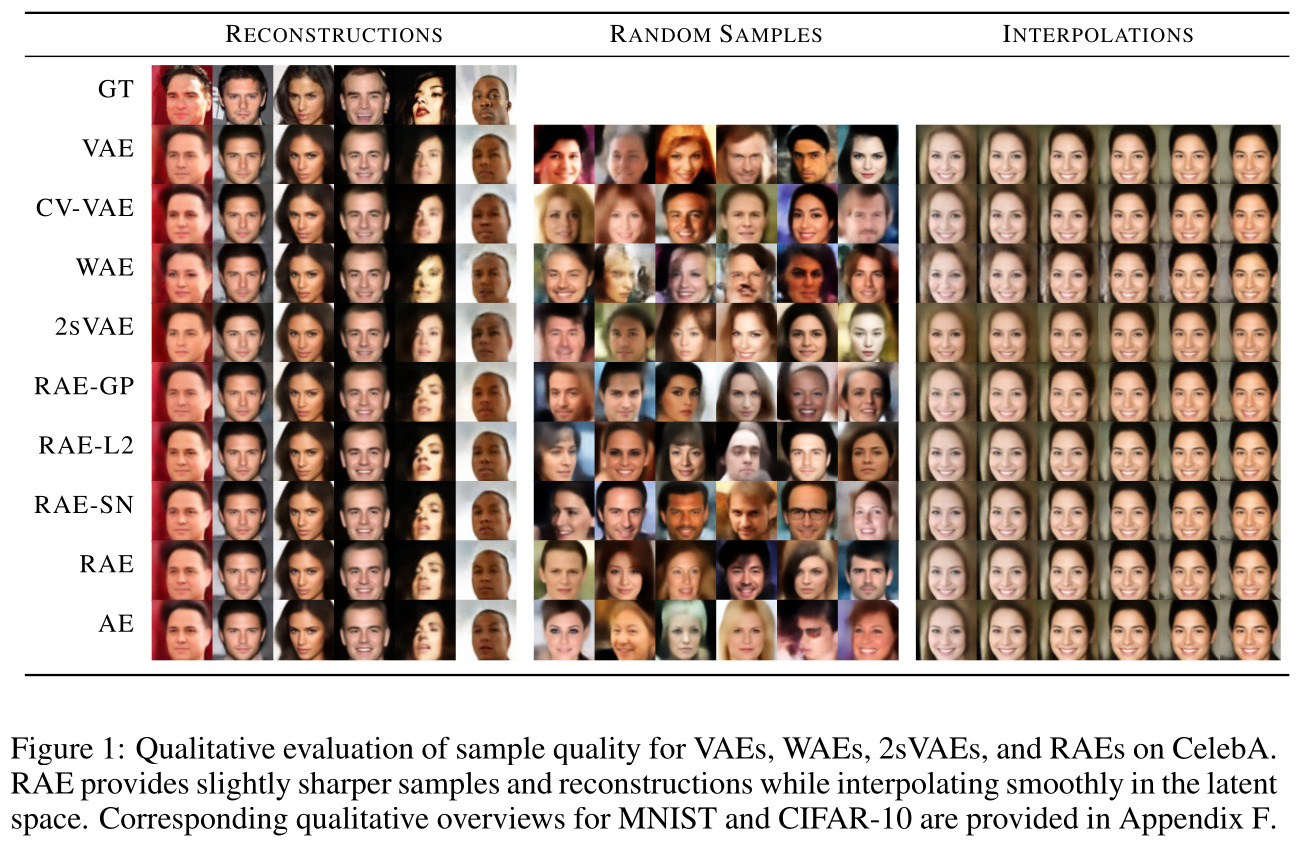 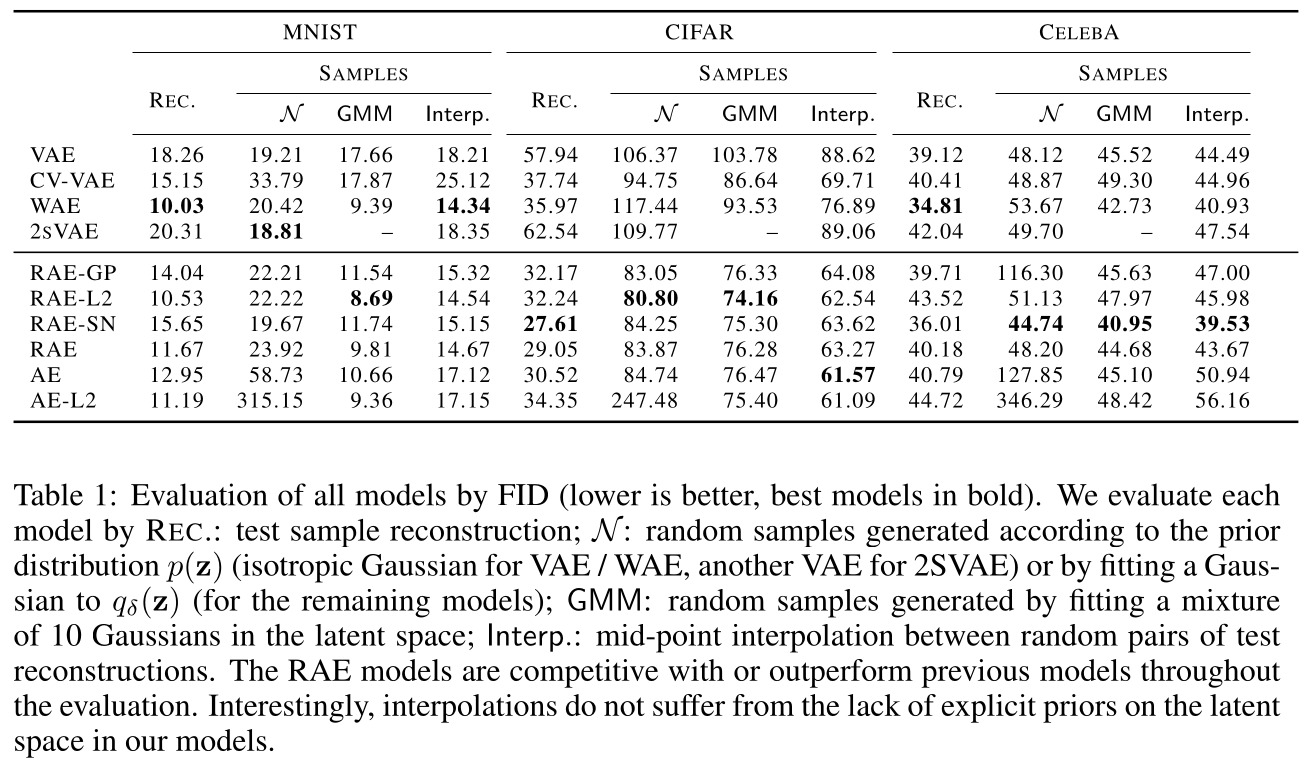 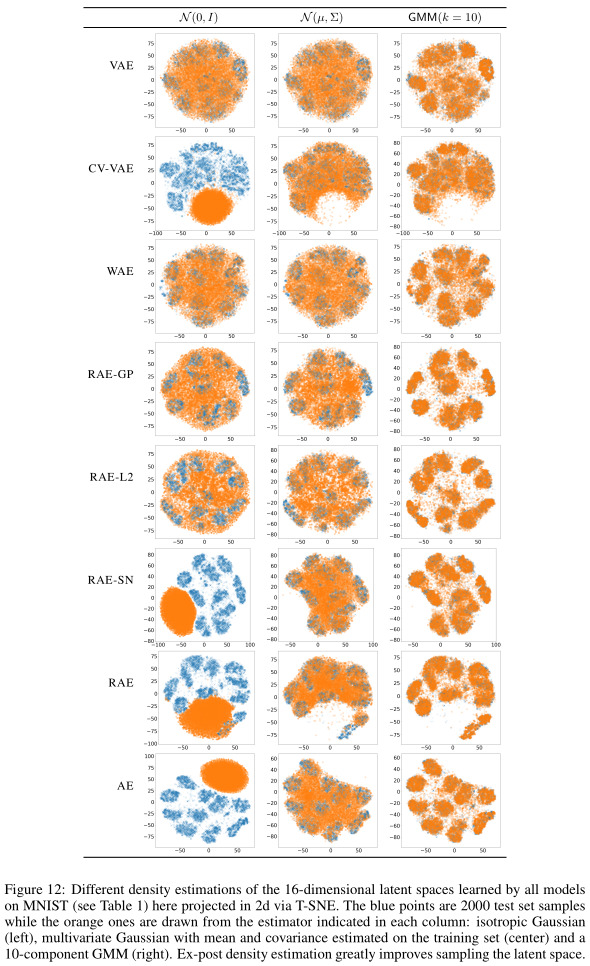