Disentangling how neural structure varies across individuals is key to better interpret the effects of disease, learning, and aging on the brain. Yet, disentangling the factors that explain such variability remains a challenge. The issue is exacerbated by the large number of features that can be extracted in neuroimaging studies.

Unsupervised data-driven, dimensionality reduction methods can provide ways to identify better the sources of variation across a population. Authors introduce a \(\beta\)-VAE-based framework that allows to interpret brain structure variation in terms of the latent factors.

Authors base their framework on a \(\beta\)-VAE. A \(\beta\)-VAE is composed of an encoder and a decoder, much like a regular autoencoder,

where \(p(x)\) denotes our dataset’s distribution over the high-dimensional image space, \(q(z \vert x)\) and \(q(x \vert z)\) are the distribution of the estimated encoder and estimated decoder respectively, and \(p(z)\) is the assumed prior on latent variable.

\(\beta\)-VAE introduce a regularization parameter for the KL-divergence term of the model’s loss:

Authors found that an 8-dimensional space and \(\beta = 3\) provided best results in their setting.

To investigate this aspect, authors applied masks to remove all content from different ROIs, modulated their intensity with perturbation weights \(w\), and fed these perturbed images into the encoder. They then fit a Gaussian to the resulting latent codes across all image examples. 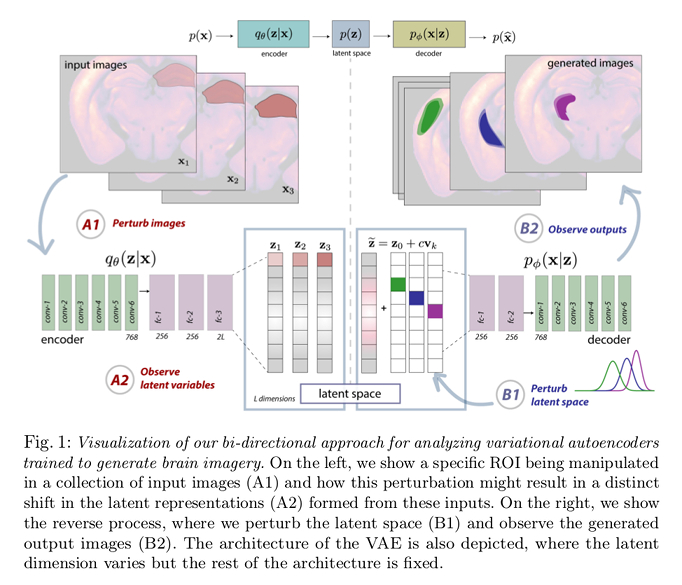 Authors evaluated the reconstruction and denoising capabilty of the proposed \(\beta\)-VAE with respect to a regular VAE and PCA approach (not shown).

As for the projective field experiments, they observed that there is some asymmetry in the interpolation: only high positive interpolation weights are aligned with patterns of variability that are known to be useful for encoding biologically meaningful variance in the dataset. Meanwhile, negative weights result into noise artifacts being more present in the image space.

One interesting result from our analysis is that, in some cases, the receptive field and projective field may not be spatially aligned (…). Our results reveal that receptive and projective fields can be asymmetric, and thus it is critical to map input-output relationships from the image space to the latent space and back again. 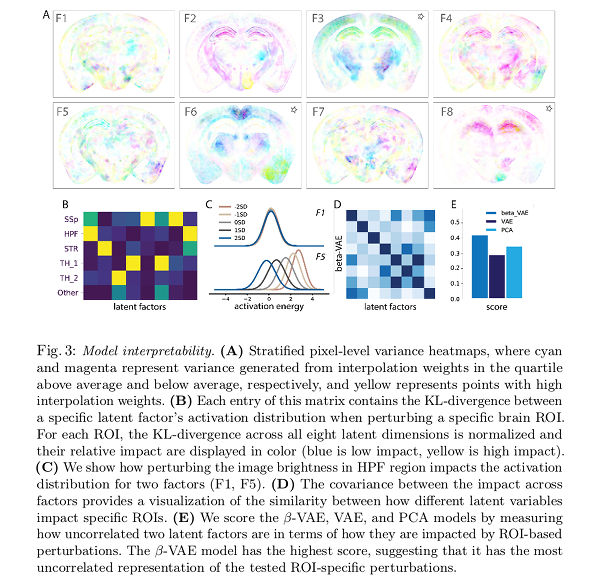 Note 1: essentially, the color code in subfigure A provides a measure of which pixels are strongly modified when a specific latent factor changes. Note 2: stars mark factors that seem to encode outliers more prominently.