Reinforcement learning (RL) typically tries to maximise the expected value (\(Q\)) of the current and future states, as defined by the Bellman Equation:

1However, the expectation might not encompass the true distribution of possible returns from a state, for example if one action might lead to disastrous rewards and another to desirable rewards. The expectation, which would fall in the middle, would actually never be encountered by the agent. The authors argue that modelling the full reward distribution allows to keep the potential multimodality of returns in different states, which stabilizes learning and mitigates the effects of learning from a non-stationary policy.

which is a \(\gamma\)-contraction meaning that

The authors instead propose to learn policies according to the distributional Bellman Equation, defined as

This last line reinforces that the policy still tries to maximize \(Q\), e.g. the expected return. However, the authors propose to learn the full distribution of possible returns, instead of just the expectation.

As such, we will want to minimize the distributional error

To do so, there needs to be a Distributional Bellman Operator \(\mathcal{T}_D^\pi\)

Finding a distance metric in which \(\mathcal{T}_D\) is a \(\gamma\)-contraction is the main question of the first part of the paper.

For two distributions \(p\) and \(q\) with the same support, the Kullback-Liebler (KL) divergence (in the discrete case) corresponds to

The KL divergence is simple and appealing and we would hope that \(\mathcal{T}_D\) is a \(\gamma\)-contraction in KL. However, the authors argue that since the predicted and target distributions do not share the same support, the KL divergence would provide an infinite distance between the predicted and target distributions and therefore cannot be used in the current context.

Instead, the authors suggest that the Wasserstein metric can be used instead, and that \(\mathcal{T}_D\) is a \(\gamma\)-contraction in \(\bar{d}_p\).

The authors base their work on DQN3. However, instead of having \(Q_\theta\) predict the expected return, the authors propose to learn

However, \(r + {\gamma}Z(x', a^*)\) shifts the distribution and causes the “target” atoms to be misaligned with the predicted pmf. As such, the authors propose a projection \(\Phi\) to linearly interpolate the target atoms with their neighbors in \(Z_\theta\). Formally, the projected Bellman update is defined as

The process is illustrated below. 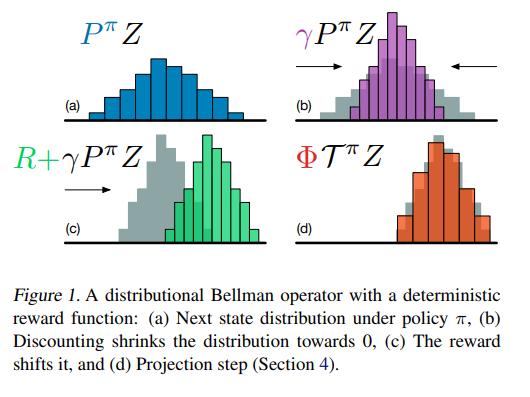 Then, the standard cross-entropy term of the KL divergence can be used as a loss function

with \(m_{0...N}\) the projected atoms, which can readily be minimized using gradient descent. The update algorithm is defined below 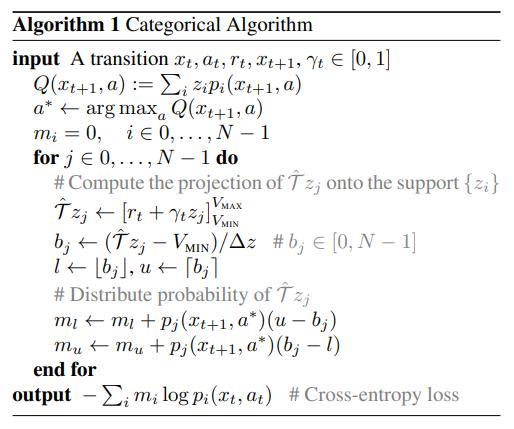 To compare themselves against DQN, the authors used the Arcade Learning Environment (ALE)4.

Varying the number of atoms 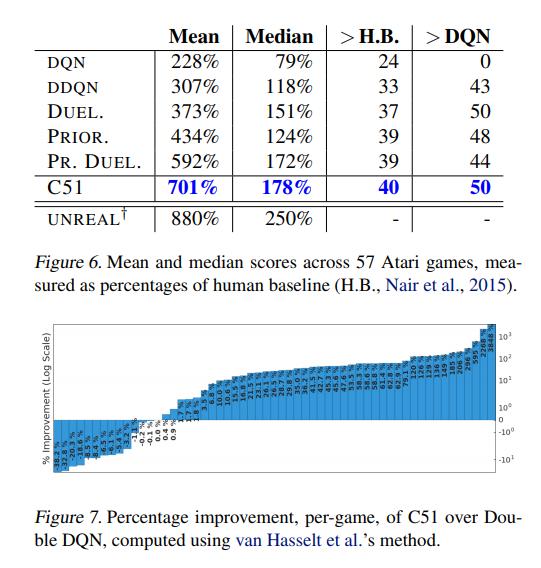