Unsupervised representation learning methods offer a way to leverage existing unlabeled datasets. Representation learning acts as a feature extractor step that is later used by downstream strategies to assign labels to previously unlabeled data. \(k\)-NN is a popular choice to classify data points within such a context using the available neighboring data point labels. However, the right choice of the \(k\) parameter is problem-dependent and not evident, and authors state it as a major drawback for some state-of-the-art methods.

Similarly, authors argue that pretext tasks used to learn the representations with the aim of using them in downstream tasks (such as clustering) are not geared towards explicitly improving the clustering ability.

Authors propose a strategy named Adaptive Clustering Variational Autoencoder (AC-VAE) to overcome the difficulty of choosing the appropriate \(k\) parameter. VAEs are usually trained to reconstruct the input signal (and minimize the latent distribution wrt a prior assumed distribution) and the learned low-level features may not be the most appropriate ones for semantic classification tasks. Authors propose to solve the classification task using the z-scores computed from the latent space distributions of the VAE.

The generative network is a modified VAE, where the mean of the distribution approximated by the encoder is added to the sampled latent vector prior to the decoder block, which generates a “representation”.

The network is trained by “behavior regulation”, i.e. minimizing the behavior loss between an input image representation and an augmented version of the same input image.

So the image reconstruction term in the traditional VAE loss function is substituted by the behavior loss.

As mentioned earlier, the latent distribution will act as a close approximation of the desired representation. The mean μ will be regarded as the image representation, and the z-score of the distribution characterizes its boundary information.

The clustering method works on the assumption that:

This work clusters the images based on the boundary information based on z-score. The insight is that, when an image is encoded into the distribution, the image’s close variations should be located within a small z-score range of this distribution.

For neighbor clustering, the neighbor whose means \(\mu\) fall into the required z-score ranges (controlled by the clustering range parameter \(\alpha\)) will be clustered. A loose match strategy by means of a single parameter \(\theta\) allows the clustering method some flexibility with respect to a strict z-score requirement. 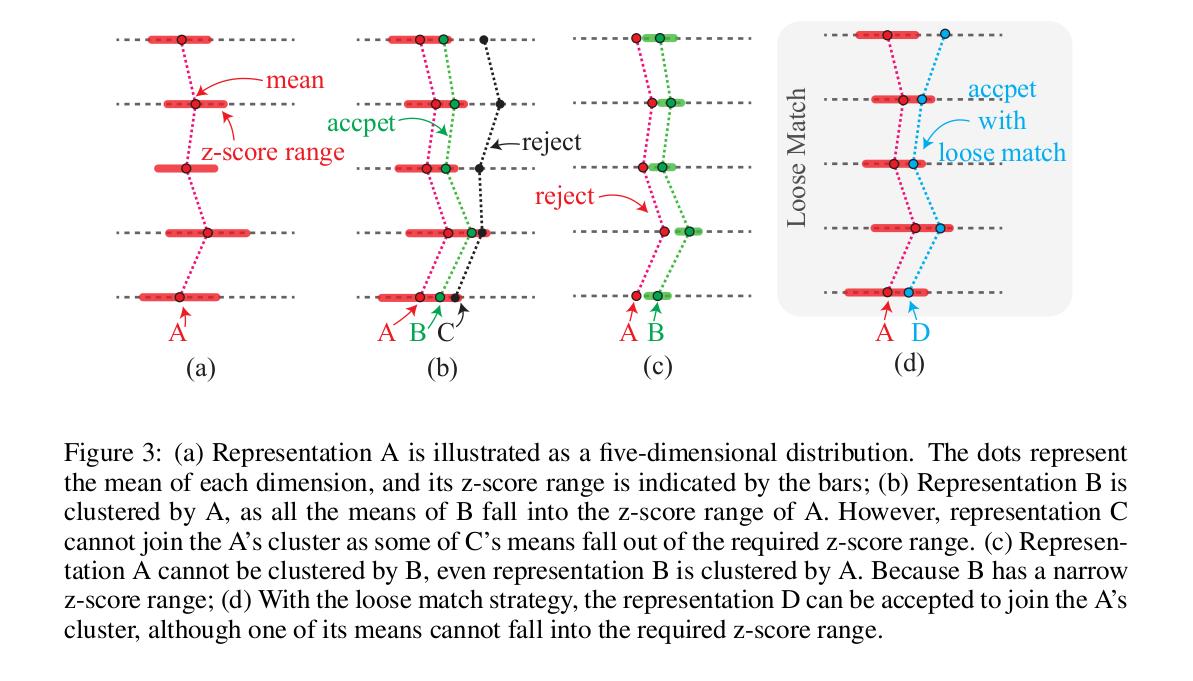 Authors argue that this framework makes the method not to depend on any might-be problem-dependent parameter:

As the experiment in section 4 will demonstrate, cluster converging after \(\alpha\) surpasses a certain value are observed on all evaluated datasets, so the \(\alpha\) needs no fine-tuning for each dataset.

In practice, there is no need to fine-select \(\alpha\) nor \(\theta\) to reach a specific cluster size unless a particular representation falls into the boundary. As the representation is a high dimensional distribution, neighbor cluster size is highly desired.

Authors use a ResNet-34 network as the encoder, and a two-layer full connection as the decoder network, providing a 64-dimensional representation vector at its output. The latent space dimensionality is fixed to 512.

Authors compare their method to a number of baselines that use a k-NN strategy for classifying the input data. They also include as a baseline their VAE network using k-NN.

Their proposed method outperforms the baselines by a considerable margin for the given cluster sizes: AC-VAE achieves between 95% and 82% accuracy on CIFAR10 when the neighbor cluster sizes are 10 and 100.

Authors present a method to perform clustering based on a VAE that looks to explicitly minimize the distance of the semantic representations of the input data, and the boundary informations retrieved from this distribution.