It’s important to note that the term “model parallelism” is often used when in fact “layer pipelining” should be used. While in both cases, the network is partitioned across multiple devices, the two concepts are different. The first is parallel, the other is not.

This form of parallelism is very common because of its simplicity. It consists in replicating the network on all devices, and distributing the batch equally to feed the replicas. It is optimal when the ratio of activations size to weight size is high (i.e. the weights are relatively small).

However, there exist examples of CNNs containing multiple “towers”, where convolutional layers are executed in parallel, with reduced communication between the towers. AlexNet is a well known example:

One of the layers best suited to model parallelism is the fully connected or linear layer. Its weight matrix can be split along one dimension or the other, and the resulting submatrices define parallel branches to be executed on multiple devices.

When splitting the weight matrix along the output dimension, the layer in a) is parallelized as shown in b): 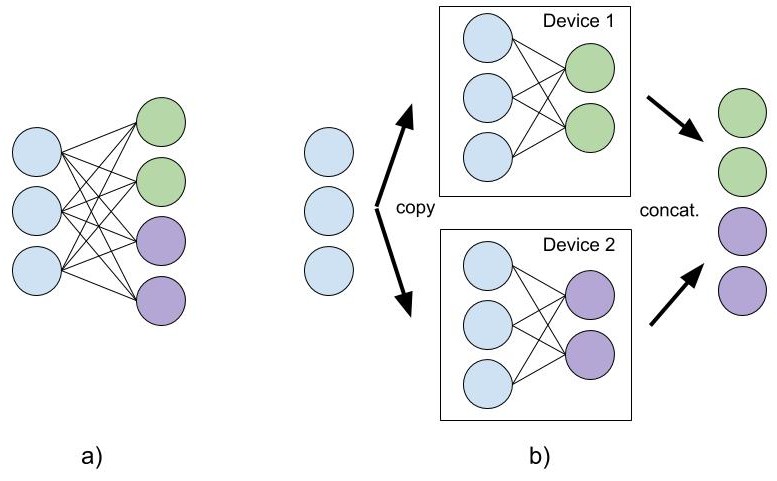 When splitting the weight matrix along the input dimension, it looks like this: 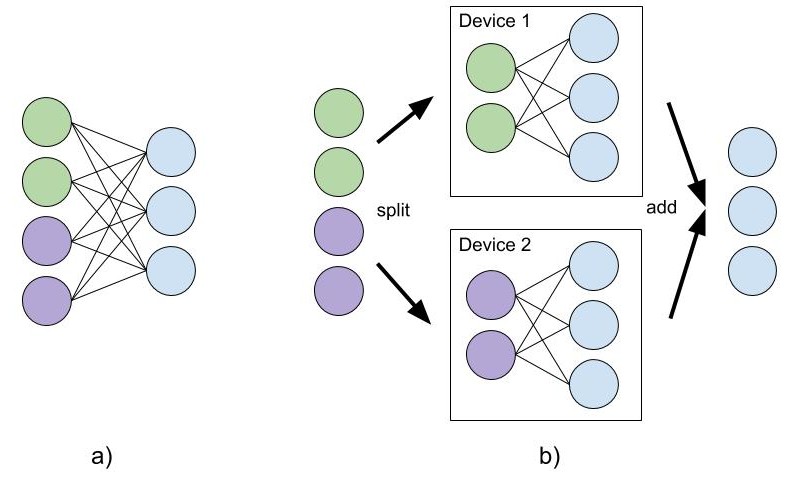 This form of parallelism is optimal when the ratio of ratio of activations size to weight size is low (i.e. the weights are relatively large).

Layer partitioning consists in placing a sequence of layers on multiple devices, to be executed as a pipeline.

Pipelining can involve the overlapping of some operations, like computing the forward pass of the current batch and the backward pass of the last batch at the same time. This is why it can sometimes be considered as a form of parallelism. This can be implemented at the framework level, so we probably shouldn’t care about this. This is described in the famous paper “One weird trick for parallelizing convolutional neural networks” (as well as the suggestion to use data parallelism for convolutions and network parallelism for FC layers).