The network is a conventional ResNet. The input diffusion data is divided into two-dimensional overlapping patches to feed the network.

A Diffusion Tensor Imaging-like acquisition (6 diffusion volumes and an additional \(b0\) acquisition) are used as the input to the network.

The predicted diffusion maps are the median diffusivity (MD) and fractional anisotropy (FA). 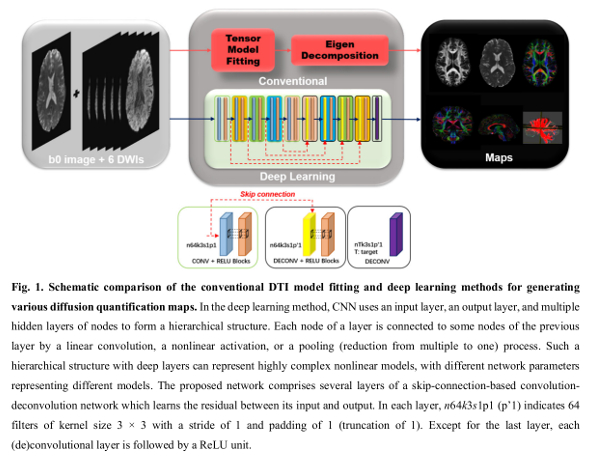 50 healthy individual data from the Human Connectome Project (HCP) was used for training and 10 subjects were used for testing. The HCP data used corresponds to the \(b = 1000 s/mm^2\) shell and 90 diffusion encoding gradient directions.

For testing the accuracy of the network on non-healthy individuals a separate dataset containing stroke patients was used.

For the HCP tests, their method was compared to the MD, FA and tractography computed using “conventional tensor model fitting methods”. The reference contained information of all 90 diffusion volumes and the comparison was done on data using 8, 16, and 36 diffusion volumes.

The authors claim that their method achieves a lower error than the conventional tensor model fitting methods. 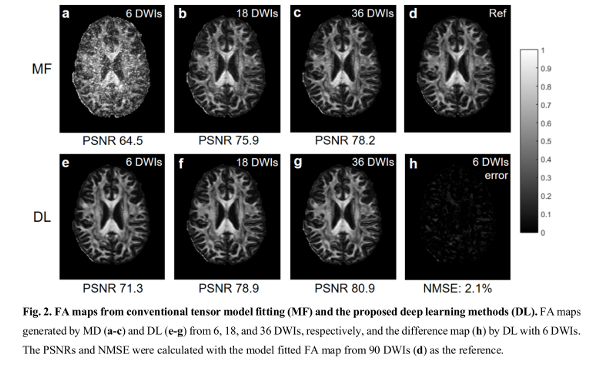 In an additional experiment, authors added Rician noise to the data to compare the robustness of their method to data imperfections.

Authors conclude that their deep learning model is able to accurately predict the MD and FA maps and tractography using a reduced set of diffusion volumes compared to “conventional tensor model fitting methods”.