In this work, the author tackles the notion that L2 regularization and Batch Normalization (or other normalization methods) have non-trivial interactions.

Note that the above points also apply for Weight Norm and Instance Norm.

In the following, \(y\) represents the output of a layer, i.e. a sequence of (FC, Normalization, Nonlinearity). Below, \(y_{\textrm{BN}}\) is the output when Batch Norm is used:

Invariance to the scale of weights

By replacing \(\mathbf{w}\) with \(\alpha\mathbf{w}\) in the formula above, we get, using the properties of the mean and standard deviation, that \(\alpha\) cancels out:

Thus, we get that:

Impact on the gradients, and the effective learning rate

Then, let’s see the impact of a scaling on the value of the gradient of the loss:

The author concludes: L2 regularization is still beneficial when training neural networks with Batch Normalization, since if no regularization is used the weights can grow unbounded, and the effective learning rate goes to 0.

For a definition of the effective learning rate, please refer to the paper.

To decouple the scale of the gradients from \(\lambda\), we can force the weights to have a constant scale:

We will see below that, in typical training regimes, using this update makes \(\lambda\) no longer affect the test error.

The dataset used is CIFAR-10, and the model is a simple 4-layer ConvNet. More details in the paper. 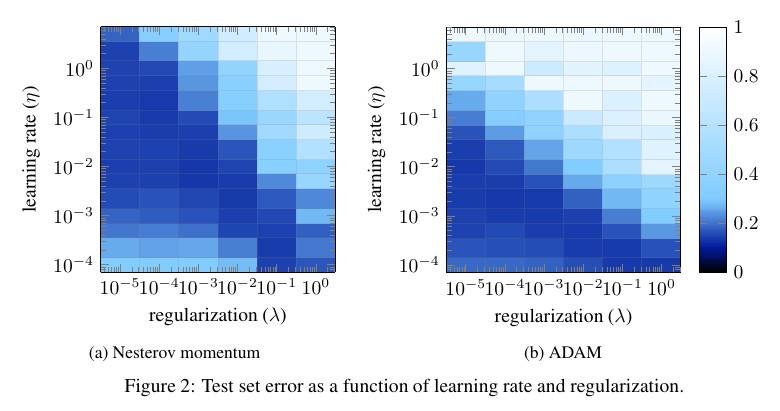 For values of \(\lambda\) that are not too large (so that the gradients coming from L2 are not overwhelming), \(\lambda\) has pretty much no effect on the test error:

The following blog post is a very noice complement to the paper: https://blog.janestreet.com/l2-regularization-and-batch-norm. It brings more experimental insights, and interesting plots.