While there is a rich history of techniques that incorporate supervised learning (SL) into reinforcement learning (RL) algorithms, it is believed that fully solving RL problems using SL is not possible, because feedback from the environment provides error signals in SL but evaluation signals in RL. Put simply, an agent gets feedback about how useful its actions are, but not about which actions are the best to take in any situation. On the possibility of turning an RL problem into an SL problem, Barto and Dietterich surmised: “In general, there is no way to do this.”

Upside-Down RL (UDRL) diverges from other attempts to formulate RL as a SL problem in that the reward, amongst other things, is now included as part as the model’s input. The model then learns to map the input, a concatenation of the current state of the environment and the desired command to actions to apply to the environment.

The training can be split into two phases (that can also run simultaneously and update each other once in a while): Training (alg.1) and Gathering (alg.2)

Training is done by selecting a batch of episodes from the replay buffer, fetching only a random part of the episode, building the associated commands and using the actions as targets. To gather new episodes, the mean length of the top N episodes in the replay buffer is used as \(d^h_0\) and \(d^r_0\) is sampled from \(\mathcal{N}(M,S)\) where M and S are the mean and standard deviation of the reward of the same episodes.

Tests were done on LunarLander-v2, TakeCover-v0 and LunarLanderSparse, where the reward is delayed until the last step. 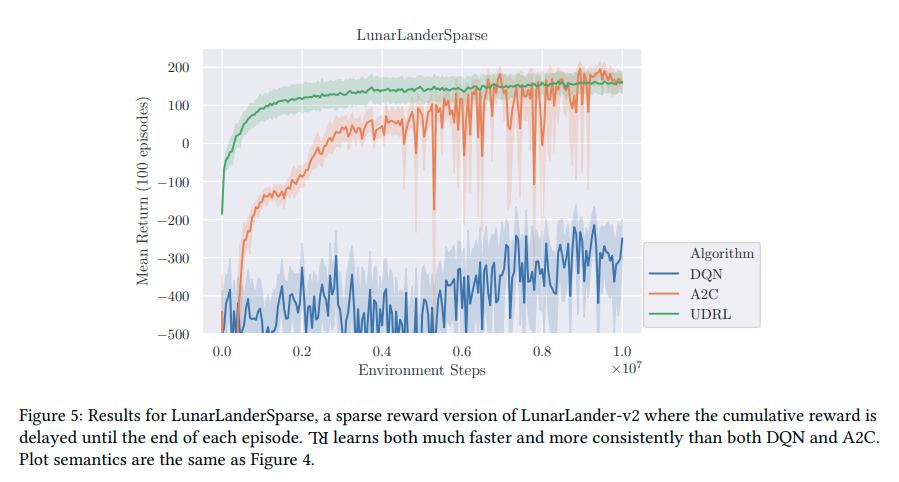 UDRL solves a couple of problems related to TD-Learning and infinite horizon, do not have to learn from moving targets, and more while having decent results.