Machine learning (ML) models may be deemed confidential due to their sensitive training data, commercial value, or use in security applications. Increasingly often, confidential ML models are being deployed with publicly accessible query interfaces. ML-as-a-service (“predictive analytics”) systems are an example: Some charge users for access on a pay-per-query basis. The tension between model confidentiality and public access motivates [the authors’] investigation of model extraction attacks. In such attacks, an adversary with black-box access, but no prior knowledge of an ML model’s parameters or training data, aims to duplicate the functionality of (i.e., “steal”) the model 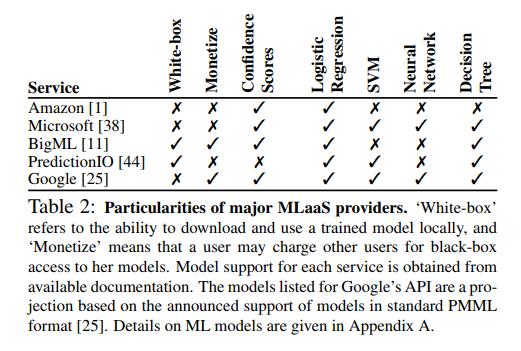 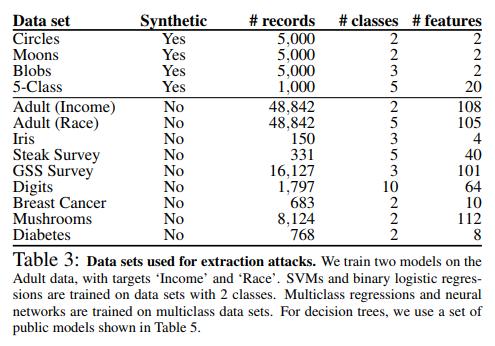 First off, extraction attacks on prediction APIs that return confidence values. Here, \(f(x) \in [0,1]^c\) where \(c\) is the number of classes. For simple enough models, equation-solving attacks can be used to directly infer the model’s parameters. For example, in the case of a binary logistic regression (LR) with parameters \(w \in R^d\) that outputs a probability \(f_1(x) = \sigma(wx)\), and given a oracle sample \((x, f(x))\), we get a linear equation \(wx = \sigma^{-1}(f_1(x))\) and thus, only \(d+1\) linearly independent samples can be used to recover the parameters.

For all the datasets shown in table 3, the authors could train a model and extract it in \(d+1\) predictions with 100% confidence error. For these models, the attack only required 41 queries on average and 113 at most.

The authors also took a shot a attacking multiclass LR (MLR) models, such as softmax and one-vs-rest (OvR) models. MLRs models are parametrized by \(w \in R^{cd}\), and no longer provide linear equation systems to be solved. However, by minimizing an appropriate loss function, such as the logistic loss, the optimization problem becomes convex and can converge to a global minimum. This also applies to multi-layer perceptrons (MLP) which are parametrized by \(w \in R^{dh+hc}\) where \(h\) is the number of hidden layers. However in the case of MLPs, the loss function is no longer convex and the optimization may not converge to a global minimum. 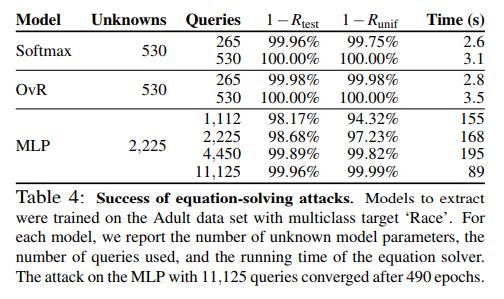 The authors then tried to extract models setup online on BigML and Amazon AWS. BigML uses decision tree which will not be adressed in this review. Amazon, however, allows users to upload their data and then Amazon will perform feature extraction and then train a model on these features.

In all the attacks, the authors were able to learn about the model’s class, the enabled feature extractors and hyperparameters through the ML service AWS’s documentation. In a real world scenario, an attacker could narrow down its hyperparameter search through similar techniques and cross-validation.

Extraction Given Class Labels Only

Without going into details, the authors wanted to see if they could extract the model through only class predictions. The general strategy is called retraining, where the authors query the models with data points that are close to \(\hat{f}\)’s decision boundary. 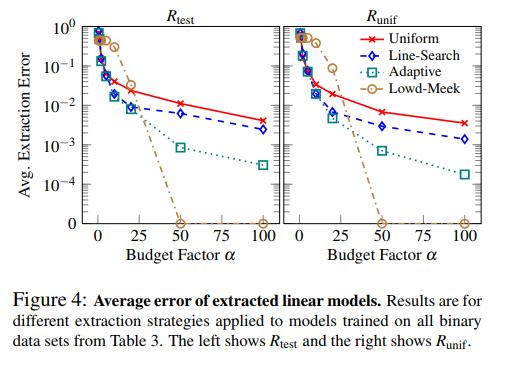 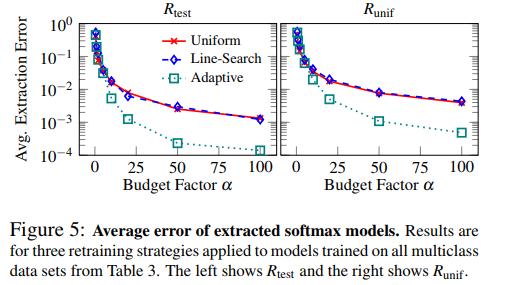 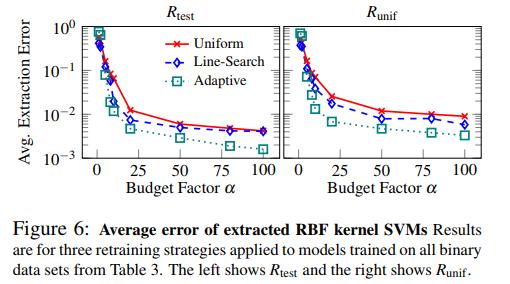 Prevention from such attacks

The authors suggest some countermeasures to such attacks, such as rounding off the prediction’s accuracy. The impacts of rounding the accuracy (or only providing class labels) is reported below 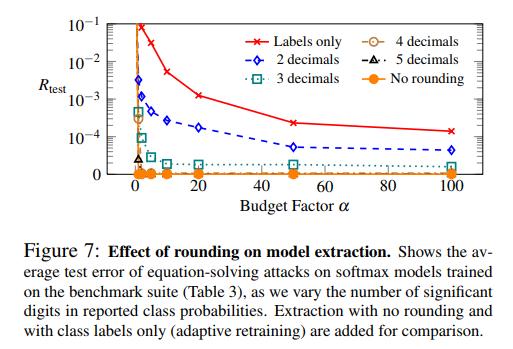