Their method uses an adversarially trained autoencoder to capture the patterns that characterize the progression of such diseases. They are also able to condition the generated images on non-imaging features (such as age, diagnosis, etc.).

Simulating images representative of neurodegenerative diseases is important for predicting patient outcomes and for validation of computational models of disease progression. Traditional computational methods are limited by imposing a parametric model for atrophy and are extremely resource-demanding.

Other generative models that have been proposed in literature have a few limitations, such as introducing the same morphological changes across all subjects.

The first pre-processing block (blue) extracts a normalized slice \(x\) from the MRI. The second component (grey) is a Conditional Deep Autoencoder (CDA) composed of two deep neural networks: an encoder \(E\) that embeds \(x\) in a latent space \(Z\), and a generator \(G\) that projects the vectors produced back to the original manifold.

The latent vector \(z\) is conditioned on two variables:

Finally, disease progression is modeled through some biological constraints (orange). 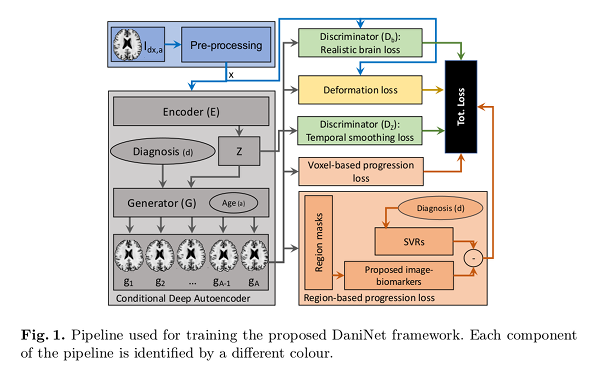 Two discriminators are used for the adversarial training:

Authors used T1-weighed longitudinal MRI images from the ADNI dataset to train and test their method:

Pre-processing consists of linear co-registration to the MNI template, skull-stripping, and intensity normalization.

In the figures below \(x\) indicate baseline visits, and \(y\) corresponds to follow-up visits (ground-truth). Results are reported as different combinations of the proposed loss functions/priors: 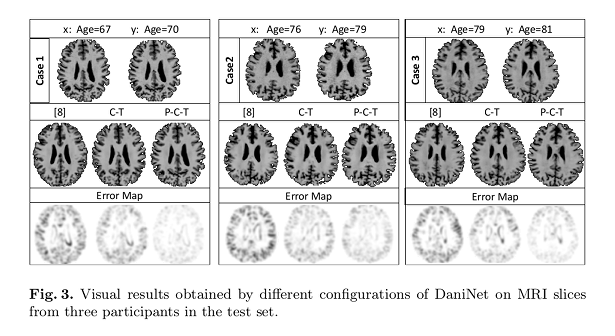 Qualitative comparisons were also carried out to assess the perception of medical imaging experts by asking to select the closest synthetic image from the pool of configurations.

Clearly, the best results are obtained when the framework includes all three components. The baseline model produces inferior SSIM. Transfer learning \(T\) is the feature that provides the highest contribution.