Authors demonstrate that adversarial examples can be attributed to the presence of non-robust feature: features derived from patterns in the data distribution that are highly predictive, yet brittle and incomprehensible to humans.

Adversarial examples are inputs to a deep learning algorithm that have been slightly perturbed to cause unintended behavior or response.

Classifiers are trained to solely maximize (distributional) accuracy. Consequently, classifiers tend to use any available signal to do so, even those that look incomprehensible to humans.

The research team leveraged standard image classification datasets to show it is possible to disentangle robust from non-robust features.

For any given dataset, they are able to build

These useful, non-robust features help with classification in the standard setting, but may hinder accuracy in the adversarial setting.

In a standard classification task, there is no distinction between robust and non-robust features when minimizing the loss. The classifier will use any useful feature to decrease the loss.

In the presence of an adversary, useful but non-robust feature may be anti-correlated with the true label, and the general loss minimization strategy is no longer sufficient for proper robust training.

Since high-dimensional, complex features cannot be directly manipulated, they leverage a robust model and modify the dataset to contain only the features that are relevant to that model.

They use the set of activations in the penultimate layer to build a mapping for each input image to the set of robust images. They enforce the features maps to be similar for the original images and their robust versions.

Given the new, robust training data set, they train a standard classifier using standard (non-robust) training, and test it on the original test set.

As a control, they use a standard (non-robust) classifier on the non-robust dataset.

The adversarial-training methodology is based on 1.

They construct a non-robust dataset where the only features that are useful for classification are non-robust features.

To accomplish this, they modify each input-label \((x,y)\) pair selecting some target class \(t\). Then, they add a small adversarial perturbation to \(x\) in order to ensure it is classified as \(t\) by a standard model.

And since every \(x_{adv}\) is strongly classified as \(t\) by a standard classifier, it must be that some of the non-robust features are now strongly correlated with \(t\) (in expectation). 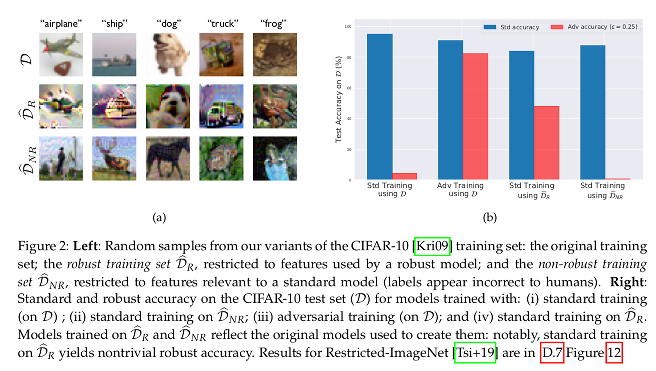 By filtering out non-robust features from the dataset (e.g. by restricting the set of available features to those used by a robust model), one can train a robust model using standard training.

According to these findings, adversarial vulnerability is not necessarily tied to the standard training framework, but is rather a property of the dataset.

Authors conclude that the adversarial vulnerability is a direct result of our models’ sensitivity to well-generalizing features in the data.

Their findings lead them to view adversarial examples as a fundamentally human phenomenon.

A few interesting posts that explain the main findings of the article:

Artificial Intelligence may not ‘hallucinate’ after all - wired.com