Inspired by ResNet and RNN, the authors present networks organised as a “clique”, a original way of connecting layers in order to optimise the information flow.

They further improve it by adding :

The multi-scale approach is nothing fancy : the final prediction is performed from feature maps from three cliques which operate at different scales.

The optimization of a clique is more tricky as it requires a two-step approach : 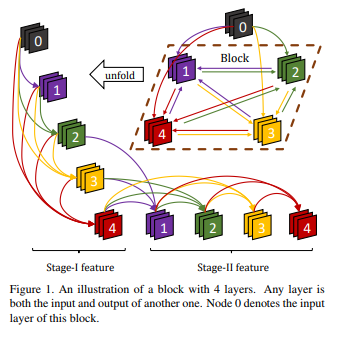 The idea is that residual connections can be extrapolated as a RNN as they give “later” layers access to “earlier” (unprocessed) information. DenseNet, which consists in aggregating outputs of all previous layers as inputs, shows a rapid growth of parameters. To alleviate this, a clique structure recycles its weights.

The transition can be used to provide an attention feedback from higher levels to refine lower level activations by applying binary weights to filters: 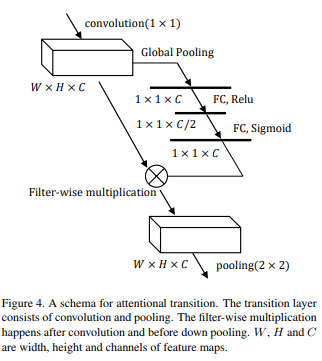 They also use 1*1 convolutions to compress the input of a given clique and reduce the number of parameters (bottleneck effect).

The feature maps from a clique are forced to be reduced by half in number (compression).

Implementation details : They use three to four scales with cliques of 5 layers. Each layer contains 36 filters, use batchNorm and ReLu. Note : They strongly benefit from decaying the learning rate. 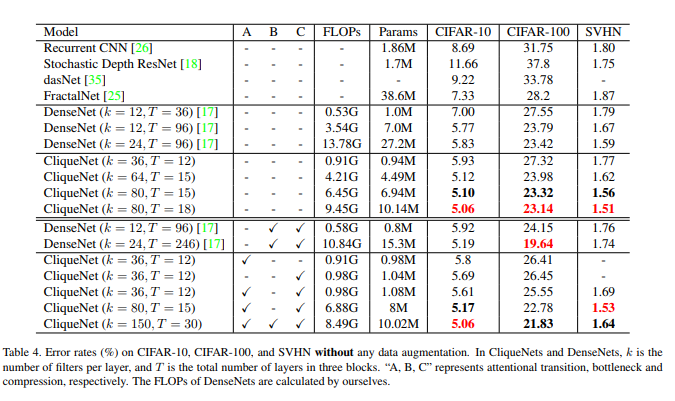 Without extra-techniques, they always outperform by a small margin DenseNet with fewer parameters and without data augmentation.

Observation : Attention and Compression always add a little something but the BottleNeck isn’t so consistent.

With extra-techniques, and CliqueNet with the highest capacity, the best scores can be obtained on all three datasets (but the comparison without extra-tech is not provided). 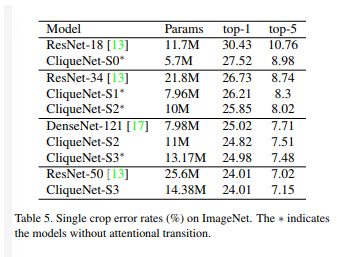 The same can be said when compared to ResNet on ImageNet. 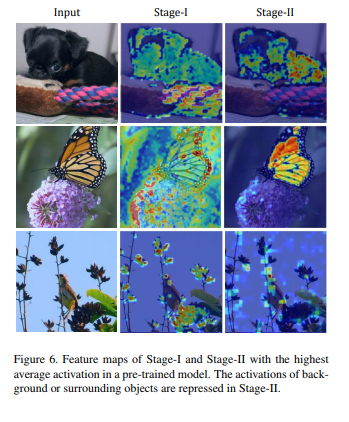 The second stage helps denoising the feature maps by extracting features focused on object of interests.