Observing that regular CNNs exhibit translational invariance but suffer from rotational variance, the authors propose a CNN architecture based on steerable filters (called SFCNN) featuring rotation equivariance. Employing their approach circumvents the need for rotation in data augmentation and reduces the ‘sample complexity’ of the network. The authors’ main argument in support of equivariance properties of a network is that by doing so, the hypothesis space (i.e. the possible transformations found in the data) is reduced which simplifies the learning task. 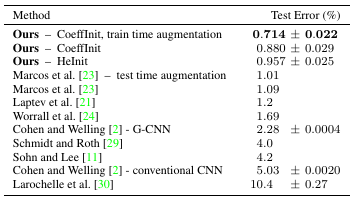