The authors introduce an extension called ‘Squeeze-and-Excitation’ (SE) block which should enable a network “to perform feature recalibration through which it can […] selectively emphasise […] and suppress” features.

They show how such SE-blocks improve performance on several datasets for several architectures while maintaining a reasonable network complexity (in terms of number of parameters as well as computational load).

The basic idea is to enforce the network to regard non-linear interdependencies between spatial features in different channels without any supervised intervention. This is achieved by reducing the output features of a transform block of the original network by a global statistic (e.g. global average pooling) and predicting a scalar weight per channel from such a vector of channel-wise (scalar) statistics.

Examples for extension of existing architectures 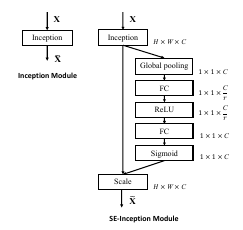 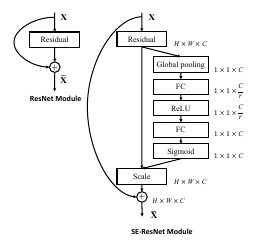 Caption: Colored curves represent the average activations for different classes (computed over 50 samples for each class) plotted over channel index.