This paper developed a method to reduce large two-dimensional images to significantly smaller “feature lists.” These feature lists overcome the problem of storing and manipulating large amounts of data.

Because radar satellite frame rate is less than a frame per second and their image resolution is low, it is hard to get ocean-surface features. However, the internal wave signature due to tidal flows over the continental shelf and ship wakes were observed in Seasat data. These activities have a long duration and allow ship detection.

In order to ensure that the entire wake appears in the digital representation, radar images would require between 10^6 and 10^8 pixels.

Results are presented for a wake-processing system operating on radar imagery produced by numerical simulation and by data collected with the NASA-JPL AirSAR. They show that a new conjugate gradient training can be possible.

They use concepts of plane-wave detection in the Fourier space to develop the algorithm. 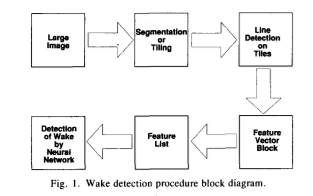 “feature vector” is the normalization of the signal to its sum.

“Feature list” is a pair of numbers, one for each tile, consisting of the maximum probability and its angle. 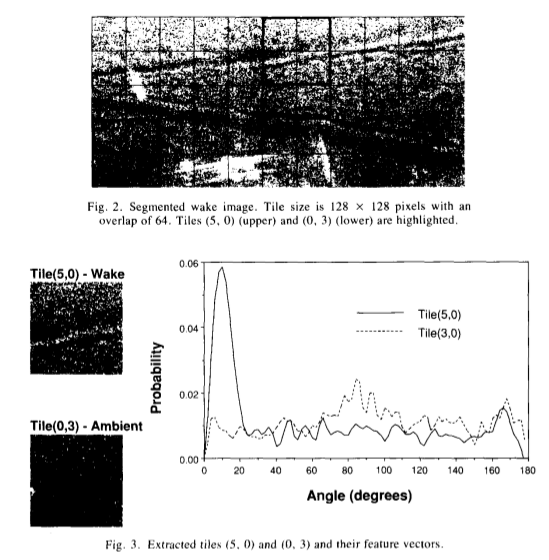 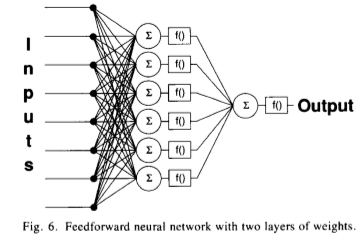 They use the following five methods in their neural network implementation: Fletcher-Reeves, Polak-Ribière, Hestenes-Stiefel, Shanno, and steepest descent. The learning parameters (convergence parameters), are 0.1, 0.3, 0.5, 0.7, and 0.9. 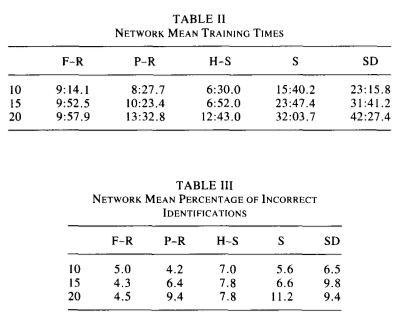