This method proposes a form of compression by trying to mimic a big model with a small model. The method is really simple, they compute the distance between the last feature maps of both models as an added loss.

The authors did not compute the loss on empty regions. They mask the feature maps with the regions of interest detected by the Region proposal network. The loss is then normalized and added to the regular loss on the bounding boxes.

To further speed up the network, the small network has an input size reduced by half from the original. The final feature map is then upsampled by deconvolution. 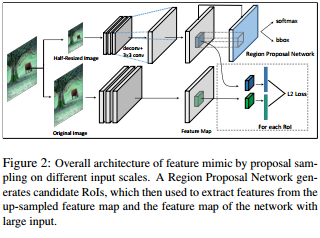