They split the problem in two smaller ones. They use a network to detect the scale of faces in the image and another one to place bounding box on these faces.

First, they use a CNN model (SPN) to predict an histogram of scales of faces in the image, as shown in Fig.3.

They refine the prediction of the SPN by smoothing it with a moving average and use the non max supression algorithm to have fewer scales as shown in Fig.4. 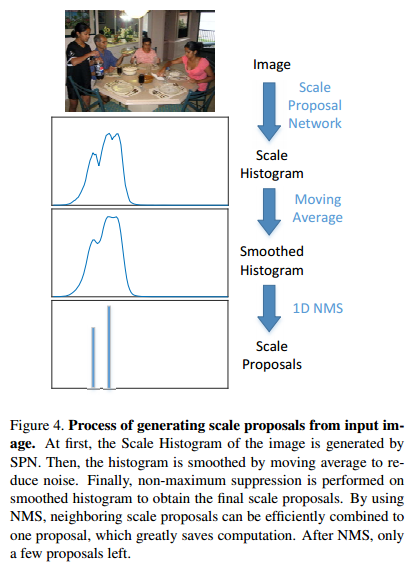 With the scale proposals produced by the SPN, they rescale the image given the scaling histogram and predict the boundingbox face for all the rescaled images with the Single Scale RPN as in Fig.2.

They use Faster r-cnn as their RPN method (paper, code). The inner network for these two models is made from GoogleNet.

For the scaling vector used in the SPN they use a gaussian function centered on the ground truth face size.

They report SOTA results on the three datasets with a mean recall of 88.15% and an average precision of 98.77%.