Batch Normalization (BN) is a layer to be inserted in a deep neural network, to accelerate training.1

We want to reduce Internal Covariate Shift, the change in the distributions of internal nodes of a deep network during training. It is advantageous for the distribution of a layer input to remain fixed over time. To do so, we will fix the means and variances of layer inputs.

Consider a layer with sigmoid activation \(z = g(Wu + b)\). For all dimensions of \(x = Wu + b\) except those with small absolute values, the gradient flowing down to \(u\) will vanish and the model will train slowly. Since \(x\) is affected by \(W, b\) and the parameters of the layers below, changes to those parameters during training will likely move many dimensions of \(x\) into the saturated regime of the sigmoid and slow down training.

Training converges faster when the inputs of the network are whitened (linearly transformed to have \(\mu = 0, \sigma^2 = 1\), and decorrelated). Thus, we’d like to apply whitening to the input of each layer.

where the mean and variance are computed on the mini-batch.

Constant normalization during inference. During inference, we want the output to depend only on its input (not on other examples). For this, instead of the mini-batch statistics, we use statistics from the whole population, which are constant. In practice, we compute these statistics during training using moving averages. Since the normalization is now fixed, it can be composed with the scaling by \(\gamma\) and shift by \(\beta\), to yield a single linear transform.

thus the normalization canceled the effect of the update of \(b\). As training continues, \(b\) will grow indefinitely while the loss remains constant. To address this, we must view the normalization as a transformation taking both the sample \(x\) and the whole mini-batch \(\mathcal{X}\) :

This means that we need to compute two Jacobians :

The latter term allows us to consider the mini-batch statistics in the process of gradient descent, which in turn avoids the parameter explosion described above.

How to use it

Put BN before nonlinearities. Since the input \(u\) of an affine layer \(x = Wu + b\) is likely the output of another nonlinearity, the shape of its distribution is likely to change during training, and constraining its first and second moments would not eliminate the covariate shift. Thus, we normalize \(x\), not \(u\).

Interestingly, with BN, back-propagation through a layer is unaffected by the scale of its parameters :

As seen above, larger weights even lead to smaller gradients.

Adapt the learning process. Simply adding BN layers to a network does not take full advantage of the method. These further steps should be taken :

The following are the results of the experiments shown in the paper.

Figure 1 : Results on MNIST using 3 fully-connected hidden layers with 100 neurons each and sigmoid nonlinearity. (a) The test accuracy with and without BN (the x axis is the number of training steps). (b, c) The evolution of input distributions to a typical sigmoid over the course of training. The 15th, 50th and 85th percentiles are shown. 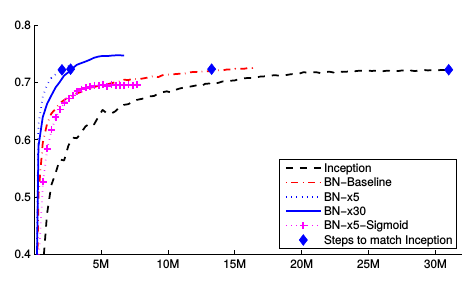 Figure 2 : Results on ImageNet using a variant of Inception (see paper for architecture details – referred to as Inception in the figure). Below are the other architecture variants tested :